For close to over a decade, gospel star Omega Khunou kept a secret.

No eye, trained or untrained, could pick it up because the secret was buried deep down in the cavities of his heart. Hide it, he did with only his wife Kea in the know. Underneath the emphatic performances and stylish swagger loomed a secret that was well covered.

And of course the secret is that the man who led the masses in praise and worship had something eating at him constantly. His decade long agony is that the singer and his wife have battled to experience an essential blessing in a form of the fruit of the womb.

“We have been married for close to 12 years. During the period we have had four miscarriages. It’s been difficult and painful,” said an emotional Omega.

However the heavens smiled on Omega and Kea this year. The couple welcomed a baby boy – Reaboka Praise Khunou on July 28. “It’s by the grace of God.”

In a candid interview Omega opened about the emotional turmoil he endured with during the years where he and his wife battled to have children. The pain and the stigma, of not having kids, were even carried into performances on stage but many didn’t know. During a performance, Omega would break down and the masses would assume the song minister is touched by the Holy Spirit while it was the pain doing the most.

“It has been difficult because you marry and at least the next year both families are expecting that they will see a child.  So they see a year pass and at the third year they start wondering even though they don’t ask but we can see that there’s a problem here.  So we told them (family) that we tried twice and got miscarriages. It was hard. For my wife, it was devastating. Some of her friends who got married after her got kids. She had to be the captain of arranging baby showers for them because they are her friends. Imagine organizing baby showers for people and you are struggling to have children,” said the musician.

“Another miscarriage that we had was when we were recording Spirit of Praise.  That month we lost the baby and I had to perform at Carnival City in front 5 000 people. I was doing a song with Bishop Benjamin Dube and then Omega is crying on the stage.  The choir didn’t know, Bishop Benjamin didn’t know and people didn’t know but I just went down on my knees when I was doing that song – Busa. Up to today people think I was in the Spirit but I was breaking. I was like I’m just going to leave my pain at the altar.”

Ironically Omega reveals that, after the performance, he was inundated with a number of messages from people testifying that they got their breakthroughs courtesy of the song. However he waited for his in tears.

“People were sending me inboxes saying your song – Busa carried me. My child was in hospital so when we were coming back

from the hospital, I was playing your song. When we got home the next thing, the doctor called us and said the child is out of ICU.  People will testify that the song carried us through but on the other hand I am praying for a child. I have been through challenging moments. You know when you go for interviews on TV or radio, they will ask ‘how many children do you have?’  I say ‘I don’t have children’ and they say ‘how long have you been married?’ and I said ‘11 years’. You can see that the person interviewing you is saying ‘oh what, no man’.”

After years of pain and prayers, Omega and Kea got blessed with a son. In celebration of his son’s “I call it Restored because of the pain of losing Neyi. God is busy restoring me from that pain because he was very dear to my heart. The second thing is that God answered my prayers by giving me a child after so many years. Restored is available now in all digital platforms,” said Omega.

There’s a popular phrase, adopted from a resistance song, which was coined during the 1956… 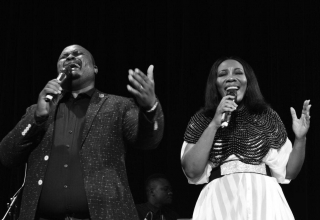 Gospel247 is an online news resource with the purpose of spreading the gospel. This digital platform covers news highlighting the great deeds of the Christian community – individuals and organizations. In deeds, songs and words, your good news is here.